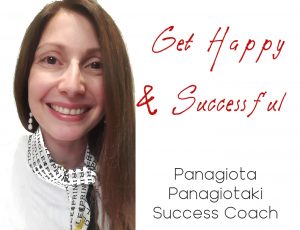 Panagiota Panagiotaki, MSc, is a Cognitive Psychologist, Success Coach and author.
She graduated from the Department of Psychology, Aristotle University of Thessaloniki in 2001, with postgraduate studies at Paris XI and Paris VI, France.
In 2011 she graduated from the international educational program CEBTT (Cultivating Emotional Balance Teachers Training), trained by Dr. Alan B. Wallace (Stanford University, President of the Santa Barbara Institute of Consciousness Studies) and Dr. Paul Ekman (University of California), to buddhist meditation techniques (shamatha, vipassana, the Four Immeasurables) and to emotional education teaching techniques, in Phuket, Thailand.
She was a scientific researcher of Neurosciences in the prestigious Collège de France and the National Centre for Scientific Research (CNRS) in France from 2001 to 2007.
She has won French scientific awards and Marie Curie European Fellowships for her research. She has participated in several European and International Conferences and coauthored many scientific publications.
In 2008 she has founded her private practice in Greece, focusing on Emotional Intelligence Education, Empowering Personal Boundaries, Dealing with Phobias, Personal Development and Goal Setting, individually as well as for groups and corporates.
She is currently launching her first web Master Mind “Empower Your Boundaries, Achieve Your Goals”.
* * * * *
She is a certified member of the Association of Greek Psychologists and the European Federation of Psychologists’ Associations (EFPA-EuroPsy), with the right to practice Psychological Activity in 21 countries in Europe. She is the published author of two books in the Greek language (“The Handbook of Dream-making: A Life-Coaching Fairy-Tale For Adults”, 2013 & “And Gods, have they grown older?”) By Archetypo Editions, Greece.
She is also the author of two ebooks: The Power Of Gratitude (2019), and Goals (2019, new edition 2020).
Besides Greek -mother tongue- she is fluent in English, French and also speaks Italian.